This series of work came about as the result of an invitation to return to the beautiful city of Rome, Georgia. I have shown there a couple of times, and am especially fond of the wonderful old Desoto Theatre. Over the weekend of July 25, 26, and 27, I will be exhibiting several paintings of the Beverly Hillbillies characters, in conjunction with a performance of the play. A portion of the proceeds from sales of prints and the original paintings will be donated to Icon Theatre Company and to Rome Little Theatre.

I was born in 1958. The Beverly Hillbillies debuted in 1961, and was seen weekly across the country through 1972. I grew up identifying with Elly May’s love for animals, and scoffing at Jethro’s idiocy. Jed was not just the patriarch of the Clampett family; he was the paradigm of the simple, honest man. Granny tickled and amused me, and Mr. Drysdale’s obsession with money helped form my political views and social consciousness. Mrs. Drysdale helped me know the kind of person I did not want to be; I shun her type even today. In short, I was as affected by the Beverly Hillbillies as were most people of my generation.

When I was invited to exhibit my work at a theatre production of the famous sitcom, I was dumbfounded as to what I could show. Nothing I had ever done, I thought, would fit with the theme. So I decided to create a series of paintings and as is so often the case, the execution of the art led me to understand my connection with the subject. As I researched the project and watched old episodes online, I was transported back to a time and place which had been living, unknown to me, in my subconscious. So, come listen to my story about a man named Jed….

I created these pieces in a fashion which was completely new to me. I knew that I wanted to portray the characters in a 60’s psychedelic fashion, kind of Andy Warhol meets Peter Max while listening to Donavan. I really didn’t know how to do it, though. I had been messing around with Photoshop for several years, always marveling at the wonders of digital manipulation (the computer kind, I mean). Likewise, I have been painting since I was a kid. The twain had never really met in my work, however, until this series. I began by designing the pieces on the computer, using Photoshop to manipulate images of the characters. I used a combination of filters until I had something I liked, and started plugging in colors which I rarely use. Lime green, day-glow orange, and deep turquoise all had me itching to go read The Electric Kool Aid Acid Test once again. Once I had what I thought was a good start, I sent the images on to a local print shop. The good people there printed the images in grayscale on canvas, and I had my schematic ready to go.

Once I began laying colors on the canvas, I discovered that the brush had ideas of its own. Some of my planned images were changed, some were nearly completely concealed, and others were discarded. What was left were portraits of America’s First Family.

I have had great fun creating these portraits of the characters from the television series. I watched many episodes online while I was executing the paintings, and I laughed as hard then as I had several decades ago. The Clampetts and their kin are a part of the American experience of the 1960s and 1970s which won’t be forgotten for a few more years, I am sure.

Both the original paintings, approximately (20" x 26" each) and prints on canvas are available for sale. Contact me at lorikgordon@gmail.com for prices. The Tao of Jed is my portrayal of the patriarch of the Clampett clan. Jed has been represented as a being who has reached enlightenment. He has streams of light pouring out from behind his head, and the fist on the chin signifies that although he is a simple man, he ponders the mysteries of life.
Posted by Lori K Gordon at 9:36 AM 1 comment: 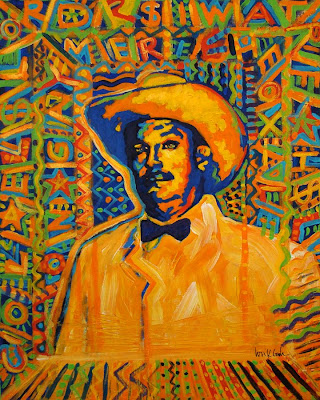 Colonel Gaylord Meriweather Foxhall was the character played by my friend Jim Curry in Icon Theatre's production of The Beverly Hillbillies. Jim, who lives in Rome, GA has become a good friend of mine and I painted this piece as a "thank you" for his friendship and support.
Posted by Lori K Gordon at 9:00 AM No comments: Mrs. Drysdale, the ultimate status seeker, has been enveloped in the crown jewels of her world; diamonds, expensive cars, fine champagnes, caviar and designer clothing and fragrances.
Posted by Lori K Gordon at 6:53 AM No comments: Mr. Drysdale has been surrounded with calculators, bags of money, stock market charts and currency symbols from around the world.
Posted by Lori K Gordon at 6:51 AM No comments: And then there is Elly, seductive, innocent, and with that dedicated love for the innocents of the planet. Here in Elly's World, she has been surrounded with some of her four-legged and winged friends.
Posted by Lori K Gordon at 8:17 AM No comments: Sorceress. I see Granny as a sorceress of her world. Her ability to forecast the weather and concoct her famous remedies as well as moonshine is alluded to by the “frame” of runes and sorcery symbols which surround her.
Posted by Lori K Gordon at 8:12 AM No comments: The Fool. I portrayed Jethro’s world as chaotic, full of wild colors, evil influences and misguided sentiments.
Posted by Lori K Gordon at 8:08 AM No comments: I understand Miss Jane as a very complex being, saintly on one level (she had to be, putting up with Mr. Drysdale all those years!) and esoteric on the other. None of us knew the depths of Miss Jane’s soul, or the inner recesses of her heart.
Posted by Lori K Gordon at 8:07 AM 1 comment: